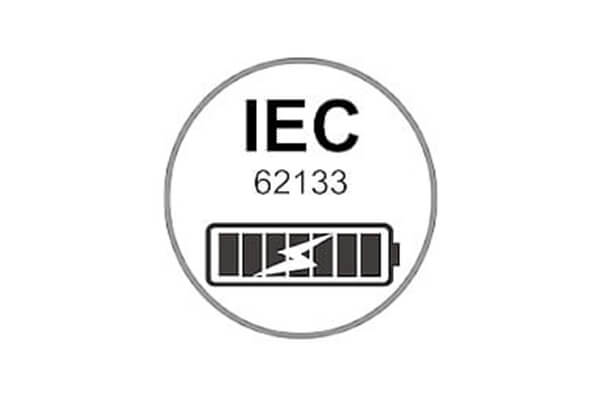 Since its first publication in 2002, the IEC 62133 series of standards has enabled international harmonization of safety testing of small cells and batteries. Since then, the standard has undergone major revisions in 2012 and most recently a major change in 2017. This article will detail these latest changes and their impact on compliance activities.

In recognition of this fact, the latest version of the IEC 62133 standard is divided into two distinct parts. Part 1 deals with nickel chemistry and Part 2 focuses on lithium. This has led to some confusion as the previous version was IEC 62133 version 2, where the new version was renamed IEC 62133-1 and -2, but reset to version 1.

The new version of the IEC 62133 standard includes testing and validation of the following items.

Specific test procedures are as follows

Fully charged cells are subjected for 28 days to a charge as specified by the manufacturer.

Fully charged cells or batteries are vibration-tested under the following test conditions and the sequence in Table 2. A simple harmonic motion is applied to the cells or batteries with an amplitude of0,76mm, and a total maximum excursion of 1,52 mm. The frequency is varied at the rate of 1 Hz/min between the limits of 10 Hz and 55 Hz. The entire range of frequencies (10Hzto 55 Hz) and return (55 Hz to 10 Hz), is traversed in 90 min ±5min for each mounting position (direction of vibration). The vibration is applied in each of three mutually perpendicular directions, in the sequence specified below.

Step 1: Verify that the measured voltage is typical of the charged product being tested.

Steps 2-4: Apply the vibration as specified in Table 2.

Step 5: Rest cell for 1 h, then make a visual inspection.

Repeated exposure to high and low temperatures shall not cause fire or explosion.

Step 5: Repeatsteps1 to 4 for a further four cycles.

Step 6: After the fifth cycle, store the cells or batteries for seven days prior to examination. NOTE This test can be performed in a single chamber whose temperature is changed or in three separate chambers at three different test temperatures.

Two sets of fully charged cells or batteries are stored in an ambient temperature of 20°C± 5 °C and 55 °C ± 5 °C respectively. Each cell or battery is then short-circuited by connecting the positive and negative terminals with a total external resistance of less than 100m . The cells or batteries remain on test for 24 h or until the case temperature declines by 20 %of the maximum temperature rise, whichever is the sooner.

Each fully charged cell or battery is dropped three times from a height of 1,0m on to a concrete floor .The cells or batteries are dropped so as to obtain impacts in random orientations.

For each shock the cell or battery is accelerated in such a manner that during the initial 3 milliseconds the minimum average acceleration is 75 gn. The peak acceleration shall be between 125 gnand175 gn. Cells or batteries are tested in an ambient temperature of 20°C±5 °C.

Each fully charged cell, stabilized at room temperature, is placed in a gravity or circulating air-convection oven. The oven temperature is raised at a rate of 5 °C/min ± 2°C/min to a temperature of130°C ± 2 °C. The cell remains at this temperature for 10 min before the test is discontinued.

Each fully charged cell is crushed between two flat surfaces. The force for the crushing is applied by a hydraulic ram exerting a force of 13 kN ± 1 kN. The crushing is performed in a manner that will cause the most adverse result. Once the maximum force has been applied, or an abrupt voltage drop of one-third of the original voltage has been obtained, the force is released. A cylindrical or prismatic cell is crushed with its longitudinal axis parallel to the flat surfaces of the crushing apparatus. To test both wide and narrow sides of prismatic cells, a second set of cells is tested, rotated 90° around their longitude in a axes compared to the first set.

Each fully charged cell is placed in a vacuum chamber, in an ambient temperature of 20°C± 5 °C. Once the chamber has been sealed, its internal pressure is gradually reduced to a pressure equal to or less than 11,6 kPa (this simulates an altitude of 15 240 m) held at that value for 6 h. No fire, no explosion

The cell is discharged as described in IEC 61960, then charged from a power supply of  10 V, at the charging current Irec, recommended by the manufacturer, for 2,5 C5/Irec h.

A discharged cell is subjected to a reverse charge at 1 It A for 90 min.

13 Cell protection against a high charging rate (lithium systems only

All of the above tests must meet the requirements of no breakage, no fire, and no explosion.?If any of these conditions are present, it is considered to have failed.

1 In the definition of “Secondary cell” include a single cell.
2. Clarify that “leakage” is the unplanned visible escape of a liquid electrolyte;
3. add a clear definition of “Reference Test Current It” as the charging or discharging current expressed as a multiple of the C5 rated capacity (ItA) during the charging time. This value is used for the entire test definition contained in the standard.
4 New definitions for “cylindrical cell”, “prismatic cell” and “cell mass”
5 Acknowledging the increasing complexity of portable energy devices, which in some cases may include both hardware and software aspects related to safety performance, the definition of functional safety was added as part of overall safety, relying on functional and physical units operating correctly in response to their inputs.

Battery pack safety circuit component failures are favored by some contributors to the standard, but are not implemented as mandatory requirements. Rather, it should be noted that a safety analysis identifying critical components “should” be provided, and that component “single failures” should be considered during short circuit testing of the battery pack. Please note that these faults may still be part of country-specific deviations from the IEC standard;

The ambient temperature conditions used for short-circuit testing have been flipped between the battery and the battery pack. The new version of the standard calls for the battery to be tested at 55°C and the battery pack to be tested at room temperature (20°C) with the thermal abuse test extended from 10 minutes to 30 minutes of immersion at high temperature (130°C). The standard also notes the prerequisite of immersing the cells at 20 ± 5°C for 1 hour prior to testing;
The compression test has been simplified to eliminate the 10% maximum deformation requirement. In addition, the force tolerance has been reduced from 13±1kN to 13±0.78kN, as described for the new nickel cell test;

The parameters for battery testing overcharging are even more insulting. While the requirements for batteries in series have not changed significantly, the voltage of a single cell or block cell has been increased to 1.4 times the upper charging voltage (not exceeding 6.0V). In previous versions, the multiplier was only 1.2 and limited to 5.0 V. In all test cases, the voltage should be sufficient to maintain 2.0?It?A throughout the test or until the supply voltage is reached. Explicit requirements for monitoring the battery case temperature have also been added;

The Forced Internal Short Circuit (FISC) test has been modified to allow protection devices in the battery or system to waive the need for this test. Additional instructions have been added for this highly prescriptive test, such as clearly defining the voltage levels to be used and the measures to be taken based on a specific response scheme. All references to multi-cell applications have been removed. Polymer and coin cell batteries are not included in this test requirement;

Since its publication in February 2017, IEC 62133-2 has been adopted by the IECEE for CB reporting. Although more extensive than its predecessor in some respects, its requirements provide clarification and improvement to internationally harmonized testing of cells and batteries. Relevant national deviations from the standard and related updates to independent national standards are expected to be released next year. As always, this situation remains fluid and varies considerably from country to country, so frequent consultation with your testing provider is highly recommended to ensure a positive compliance outcome.

EN: European Norm, European standard. CENELEC and CENELEC and their joint agency, CEN/CENELEC, are the leading standard-setting bodies in Europe, and CENELEC was established in 1976 in Brussels, Belgium, by the merger of two early institutions. Its purpose is to harmony with the electro-electric standards issued by the standards bodies of the countries concerned in Europe and to remove technical barriers to trade.

A: The IEC standard does not have a clear validity period in principle, the old and new versions of the standard can be used in parallel, such as at this stage can also apply for IEC62133:2012 version of the report and certificate, but the new standard is more accurate than the old standard, more comprehensive analysis of battery safety and performance.

First it is important to note that only certain European directives govern “CE-marking” of products. In general, portable batteries within the scope of IEC 62133 do not fall under the scope of the CE-marking directives.

The major exception is for Smart batteries which contain active electronics; such batteries may fall under the scope of the EMC directive (and EMC specific standards). EN 62133 (the EU-adopted version of IEC 62133), covers electrical safety.

IEC 62133 2nd edition referenced the UN 38.3 Transportation tests. Are these required for both Cell and Battery (Packs)?
Therefore, it was considered redundant to include these requirements as part of the electrical safety test. The 2nd edition only specifically requires these tests for cells (per section 6, Table 2).

It should be noted that the UN 38.3 requirements do not require individual cells to be tested to the T1-T4 tests (“component cells” may be tested within a battery, rather than individually).

Therefore, to be considered compliant with IEC 62133 2nd edition, the cells shall have been tested individually.

4 Our batteries is under 100watthours. Can We exempt from IEC 62133 certification testing?

The 100 watt hour limit is related to certain packaging, labelling, and shipping requirements and exceptions. Such batteries must still meet the UN 38.3 Transportation tests to qualify for these shipping exceptions. As for IEC 62133, there is no minimum/maximum capacity. If a rechargeable Lithium-ion battery is user-replaceable, portable, or used to power
a portable device, then IEC 62133 would apply. Again, certification may or may not be mandatory, depending on the market and endproduct where the battery is used.