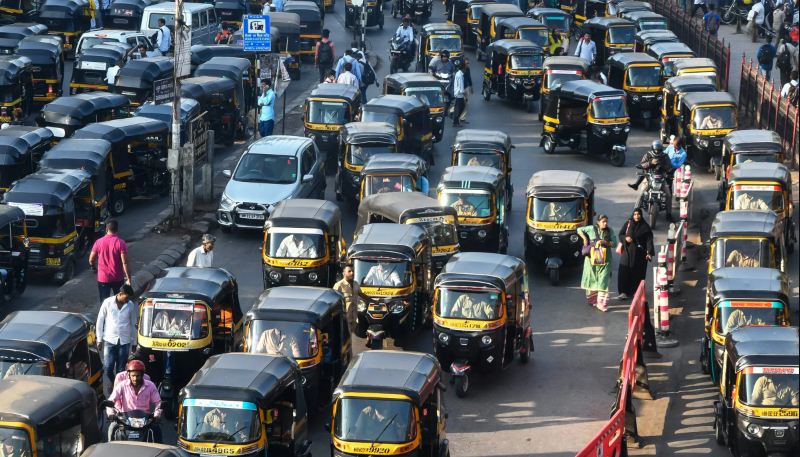 In India, electric rickshaws (e-rickshaws) cater to the need for first and last-mile connectivity in metropolitan cities. Of late, e-rickshaws have also emerged as the important mode of last-mile connectivity in tier-2 cities. Currently, the e-rickshaw market is dominated by valve-regulated lead-acid (VRLA) batteries. Now, the focus is shifting towards lithium-ion battery-powered e-rickshaws. However, the transition is slow. In this article, we present the current status of the e-rickshaw market, comparison of the battery and charging options for e-rickshaws in India.

Status of the e-rickshaw market in India

In recent years, the e-rickshaws have registered their presence as the intermediate paratransit mode for the first and last-mile connectivity in almost all major Indian cities. As of 2019, it is estimated that the cumulative fleet is close to 2.5 million, and it is expected to grow by 0.3 million per annum. In FY20, the total EV sales have been dominated by electric three-wheelers (e-3W) with ~82% share that consists of electric autos (e-autos) and e-rickshaws. E-rickshaw accounted for 98% of the total e-3W sales, where the unorganized players with more than 70% share dominated the market. The e-rickshaw market is expected to grow from USD 786.2 million in 2019 to USD 1394.2 million by 2025 with a CAGR of 33.3 percent.

Currently, the VRLA battery dominates the battery technology in the e-rickshaw market to the tune of 98%; however, a few organized players have emerged in recent times with a focus on lithium-ion batteries. As per a research report, the e-rickshaw battery market is expected to increase from USD 385 million in 2019 to USD 722 million by 2024 with a CAGR of 13.2%, and the share of lithium-ion battery-powered e-rickshaw is expected to grow more than 50% by 2025.

When comparing lithium-ion and VRLA batteries, the former has a significantly higher capacity while also being two times smaller and three times lighter, a much higher Depth of Discharge (DoD), and can be safely discharged in the range of 80–100% of total capacity in each cycle, whereas the latter can only be roughly discharged up to 50%. In other words, the usable capacity of a VRLA battery is half of a lithium-ion battery.

VRLA batteries are 99% recyclable, but the process for reclaiming the toxic lead from the battery is not environment-friendly. Lithium-ion batteries have a lower end-of-life battery waste due to their longer cycle life. Additionally, the retired lithium-ion batteries from EVs can be used for stationary storage applications before end-of-life recycling. An efficient recycling ecosystem can help in reducing pressure on the mineral resources, while simultaneously minimizing the negative impact on the environment through optimal resource utilization.

Li-ion-powered E-rickshaws can be charged much faster than VRLA powered ones. Plug-in charging of the former requires 2-6 hours with slow chargers and 10 min-2 hours with faster ones. With battery-swapping, vehicles can be charged within 2-5 minutes, while discharged batteries can be charged under a controlled environment, to prolong battery life. The maximum earning potential for e-rickshaw owners, with operations limited to an 80-90km range, is ~INR 850 on average, which could increase to INR 1800 on average with an increased range of 160km per day under the battery-swapping model, where e-rickshaw owners could visit the swapping station 2-3 times per day to swap discharged batteries with charged ones.

In India, battery-swapping is emerging as an efficient charging alternative for e-rickshaws, with its market projected to reach USD 6.1 million by 2030, with a growth of 31.3% during the period 2020 – 2030.  In addition to the possibility of bringing the e-rickshaw prices down by at least 40 – 60%, battery-swapping could scale up the electrification of the e-3W segment through e-rickshaws.

Nevertheless, the success of the battery-swapping model will depend on the progress of some technical and commercial challenges, which include standardization, reliability, and safety of the leased battery packs and the sustainability of the commercial business model.

The currently fragmented e-rickshaw market needs to be regularized to reap multiple benefits: